We were delighted to be the headline sponsor for the TwinFM, JobOppo event ‘Ex-Military – A Journey Into FM’ on March 10.

Veterans, and those who are about to leave the armed forces, flocked to the event at Old Trafford, Manchester United’s stadium.

We welcomed the chance to discuss the FM industry with them, as it enabled us to highlight what a good fit it can be for those leaving a military career. 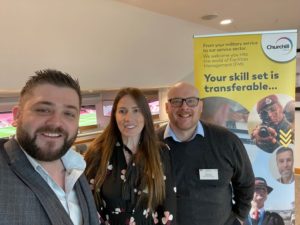 Facilities management offers a wide range of areas for newcomers to choose from, but it is fundamentally a people industry and the skillsets veterans possess give them a head start. So the theme of the day was ‘don’t sell yourself short!’

Our operations director Phil Matis said: ‘We need to make clear to veterans that those coming from all areas of the armed forces have significant skills that would benefit the FM industry.

‘Most of them don’t realise this, and facilities management isn’t a ‘first-thought’ potential career option for those leaving the military. This needs to change, as it’s simply a perfect fit.

‘It is clear from this event that face-to-face networking is the key to getting all of these messages across, as the day was a resounding success.’

It was notable that, out of all the veterans who attended, very few were women and fewer still were from different ethnic backgrounds.

This reflects the demographic of the whole armed forces community, with statistics showing that in 2021 out of 149,000 UK personnel, only just over 16,000 were women and only eight per cent were from Black, Asian and minority ethnic backgrounds.

Phil said: ‘This raises the question of how we engage with more female and BAME veterans to provide support and an easy transition into civilian life and the FM industry.’

One of the speakers at the event was our managing director of operations Louisa Clarke, a former RAF movements controller, whose own career path reveals the opportunities for women veterans within FM.

She said: ‘By sponsoring event such as these we have a real opportunity to make FM the stand-out career of choice for service leavers, and Churchill the employer of choice.’

To support veterans and make their career transition easy we are: