Radish development chef Tony Lones is an Olympic veteran. He has just returned from Tokyo and it is the fourth Olympic Games he has attended – but as a chef, rather than a sportsman!

He was part of the catering team looking after the Olympic Broadcasting Services crew. 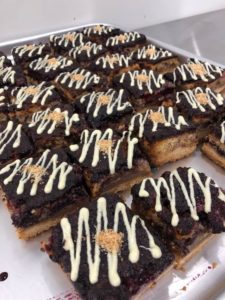 ‘Members of the team look after the crew on all sports facility compounds – boxing, tennis, golf, kayaking, hockey, football etc,’ he said.

Tony himself was providing catering in the archery team compound. 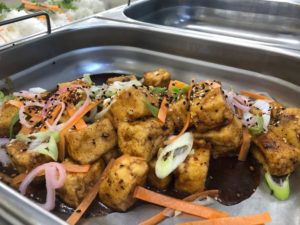 He first got involved in catering for the 2012 London Olympics, through his 20-year friendship with Tony Laurenson and Bonnie May, the owners of events business Global Infusion Group, with whom he worked during his career in events, before joining Radish.

He also attended the Winter Olympics in Sochi, Russia, in 2014 and in Pyeungcheng, South Korea, in 2018.

The Olympics Broadcasting Services crew includes representatives of all the world’s major TV companies, but Tony was not fortunate enough to meet any of our TV pundits this year. ‘When I was I Sochi, I was caught live on the BBC at midnight, as I was standing next to Britain’s ex-Olympic GB skier Martin Bell when he was broadcasting at the snowboarding event,’ he said.

This year, because of Covid -19 Tony, who was at the Olympics with his wife Tina, was restricted to only being able to watch the archery events.  ‘But Tina and I were lucky enough to catch the flight back to the UK with the GB men’s hockey team,’ he said. ‘We had a great chat with them at the airport and had our photo taken with them.’

And Tony said the pandemic failed to spoil the unique character of the games.

He said: ‘The atmosphere back-of-house at an Olympics is electric, there is a real feeling of international camaraderie, as there are so many different nations working in harmony with one goal. It is a thoroughly enjoyable experience. ‘It’s also a lovely time to meet and greet friends who we have not seen in two years.’

But, inevitably, there were some differences this time around.  ‘Normally we would be taking every opportunity to visit as many tourist sites and places of interest as we could,’ Tony said. ‘However, this time it was a case of being quarantined in a hotel for three days, followed by 14 days when we were only able to visit the local store.

‘This then only gave us one day off to wander Tokyo on our own. We visited the oldest Buddhist temple, the royal palace and the wonderful old streets full of street food vendors.

‘And we passed a row of beautiful flowerpots planted by local schoolchildren with messages attached. One said: ‘Welcome to all people of the world, please enjoy our city.’

‘Now I hope my next trip will be to the Summer Olympics in Paris in 2024.’