There are a huge number of opportunities for Armed Forces veterans within the facilities management sector and we are sponsoring a free FM careers event exclusively for those who are about to leave, or have left, the services and are seeking a new challenge.

The event, hosted by ThisWeekinFM at Old Trafford, in Manchester, on March 10, aims to show why FM is such a good fit for ex-service personnel.

Former Royal Air Force Chief Technician Jonathan Clarke is one of those to have transferred his skills to us, and he is now a Senior Project Manager.

He spent 23 years in the RAF, during which time he supported Operations in some of the world’s most war-torn countries, including Bosnia, Iraq, Afghanistan and Syria.

He said: ‘I wanted to be in the military from a young age and joined the Royal Air Force at 18 as an Airframe Mechanic.

‘I had a fantastic time and look back fondly over my career. I worked my way up to the rank of Chief Technician with my final tour on Hercules as Rectification Controller, which involved the day-to-day management of the fleet and its highly skilled personnel. 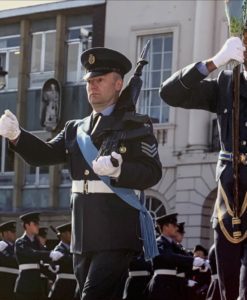 ‘I left as it was time to put my family first and I was not getting any younger.

‘I had no clear direction as to what I wanted to do next and used my resettlement programme to gain a Level 7 in strategic management and leadership that I could take to any industry.

‘I gained immediate employment after leaving the RAF but left the company after a year. I then signed a six-month temporary contract with Churchill Group to mobilise a new soft service contract.

‘The company had won a contract covering 99 sites in Scotland, from Benbecula, in the Outer Hebrides, to Glasgow.

‘Churchill saw that I had transferable skills that could be put to immediate use. As a result of my time in the RAF I could analyse, plan, engage, direct and lead, as well as be polite, efficient and reliable. And I had a positive work ethic.

‘The mobilisation was a success and I was offered a permanent job. I am now senior project manager for Scotland, the North of England, Midlands, the South West and East Anglian regions.

‘I manage all large scale, multi-site, high value soft service mobilisations from contract win to maturity, as well as leading any ad hoc projects for the senior management teams within my area.’

Louisa Clarke, managing director of operations at Churchill, who also served in the RAF, as a movements controller, said: ‘There is no reason why an ex-military professional should doubt their chances of success in facilities management. The industry has something for everyone, no matter what their career history is.

‘Above all, the industry allows employees to make a difference to people’s lives. In that sense, it is an ideal next step for those who have helped to make the world a safer place.’

‘And continuing our commitment to the Armed Forces, veterans and their families, Churchill is working towards the Armed Forces Covenant’s Gold Employer Recognition Award this year.’