As this year’s Armed Forces Day draws near, meet another of the Armed Forces veterans who has transferred their skills to a civilian career with us.

Adam Morris, the manager of the Command, Control and Intelligence Centre run by our Amulet security division, was previously a Corporal in the Second Battalion – The Princess of Wales’s Royal Regiment. 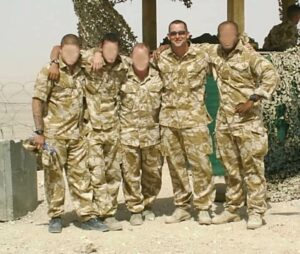 He spent 11 years in the Army and completed three tours of Northern Ireland, as well as serving in Bosnia and Iraq.

He said: ‘I left the Army after my tour of Iraq. It was a difficult decision, as I loved my time serving in PWRR. I made the choice to leave so I could spend more time with my family, but I found the transition from military life very hard indeed.

‘It took me several years to settle into civilian life. I missed the language, sense of humour, friendships, also the physical and mental support from my ‘brothers in arms’ every minute of every day and, for two or three years. It was really weird sometimes, even though I might be standing in a room full of people, I would still feel completely alone.

‘It took me a lot of time to see that I wasn’t alone and that life after the Armed Forces could be fun too.

‘After leaving the Army I spent a couple of years working in surveillance, planning and conducting surveillance operations across the UK.

‘I worked mainly as one of a pair of operators, in vehicles, on public transport or on foot. I then specialised in motorcycle surveillance, which added a new dimension to our capabilities and was a lot of fun.

‘Then I moved into contract management, looking after cleaning and security contracts for clients such as Sony, Virgin, Savills, RAF, AGA Rangemaster, Land Rover, Honda and JCB.

‘From there I concentrated specifically on security and stepped away from cleaning. I spent almost three years managing the security operation for a large shopping centre and its surrounding waterfront properties.

‘I found it an exciting and rewarding role, as I worked directly with the local police and counter-terrorist advisers to improve the site’s security.

‘I also assisted the planning and execution of out two large, multi-agency, mass casualty exercises involving everyone from our own security officers, blue light services, armed police and the Ministry of Defence.

‘I came across the Amulet role when I was looking for a job that was closer to home but that would keep me challenged and had room to develop further.

‘I also wanted to work for a business that invested in its people, and that strove to be different and valued its workforce – as I know a happy team works well.

‘The CCIC role involved running the newly created national control room and its team of controllers. Given Churchill group and Amulet’s core values, together the variety of services they offer, it was an obvious choice to apply for the role – and it was based just 20 minutes’ drive from my home.

‘My Armed Forces skill set is as useful here as it has been in every role I have had since leaving the Army.

‘Resilience, loyalty and the desire to get things done while leading by example are the basic skills all ex-forces personnel bring to the table.

‘Churchill and Amulet have grown a lot over my two years here and I look forward to developing the CCIC to accommodate the new business and fresh challenges that lie ahead. 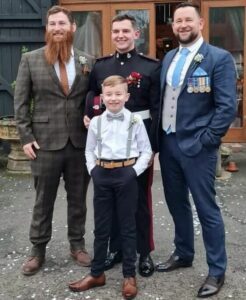 ‘Every now and again I still find myself missing the lads and the life in the Army but then I look at my lovely wife and three sons and the life we all have carved out for ourselves and wouldn’t have it any other way.’

Adam and his family unit

Adam and his three sons Kane, Josh and Riley. Josh recently joined the Royal Army Medical Corps and has been supporting the NHS in Wales, Northern Ireland and Scotland throughout the recent COVID pandemic. He is currently in Kenya setting up and running small clinics for orphans, providing basic first aid and medication to those who need it.